Allocate cannot combine (cross-tabulate) variables. However, you can use filters to only retrieve statistics related to geographic areas that have the qualities (variables) of interest to you. Read on for a step-by-step explanation.

Example: "What do people aged 65 or older spend, on average, on cellular services per year in Kitchener?"

If you wanted to answer the above question, you'd need to combine (cross-tabulate) two different variables: age 65+ and expenditure on cellular services.

Your first attempt at achieving this might be to create an output by selecting the census subdivision of Kitchener, the Age 65+ from the Canadian Attribute for age/population, and the Spending Attribute, cellular services. You'd end up with a table with this information:

However, this does not mean that the 27 084 people aged 65+ in Kitchener spend an average of $697 on cellular services.

So how can you combine variables?

First, you'll need to understand the capabilities with filtering - what can be filtered, and what can't?

Statistics within a geographic area, like a census subdivision (e.g. Kitchener) cannot be filtered to only display information on households within it that possess the desired attributes (variables). The census subdivision is a unit and the statistics associated with it cannot be altered. You can only filter from your report entire geographic areas that do not have households with the desired variables in sufficient amount. 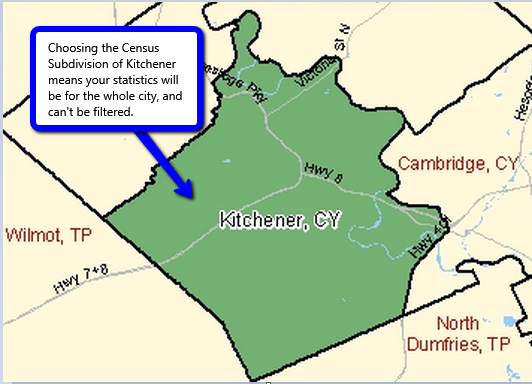 So, even if you're only really interested in statistics for Kitchener as a whole, in order to filter out areas of Kitchener that don't have the types of people or households you're interested it (or not enough of them), you'll have to select a smaller set of geographic areas within Kitchener (e.g. postal codes), filter out the less desirable ones, and then summarize the remaining, more desirable postal codes to get a statistic for Kitchener as a whole.

Put in another way: rather than selecting the census subdivision of Kitchener (1 unit), you select all the postal codes within the census subdivision of Kitchener (5659 units). Then you can filter out undesirable 'units' and be left with a list of postal codes that do have the variables of interest to you. Summing or averaging the filtered results will give you a better representation of the target group (in this case, those aged 65 who spend money on cellular services).

How to Filter Out Undesirable Postal Codes

1. On the Pick Geography tab, select all postal code groups in the geographic area of interest. 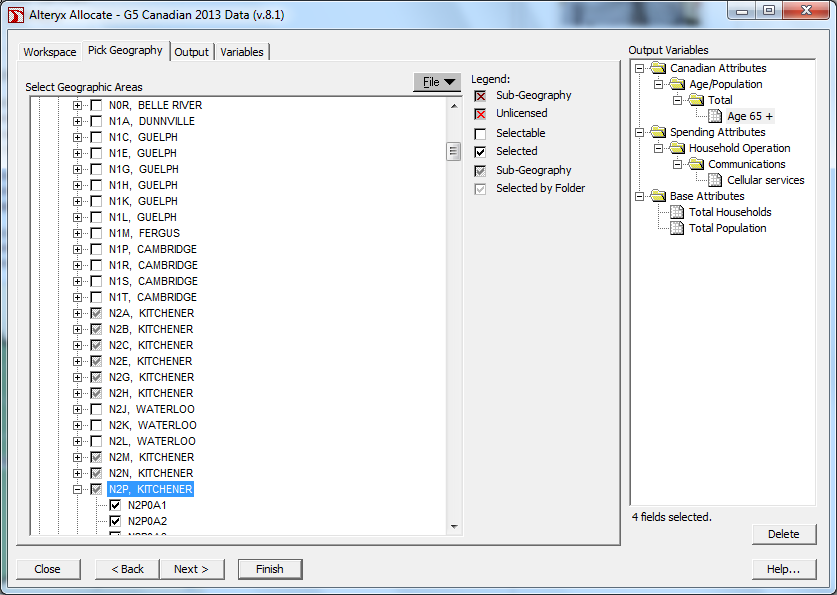 2. On the Pick Geography tab, create a filter by clicking File, then Filter Selection, then New Filter. 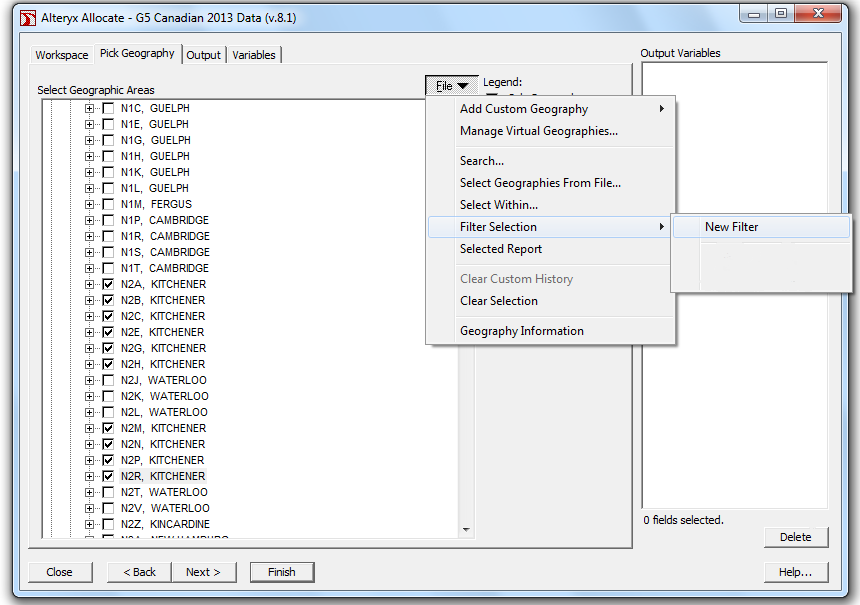 3. Design your filter. You can simply click a variable to add it to the filter, in which case, you are requesting to view only postal codes that contain people or households with that variable attribute. 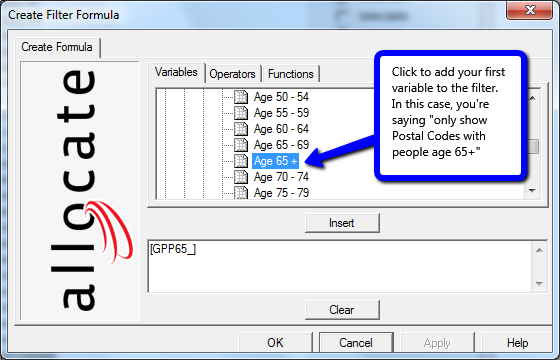 However, you will find it more helpful to filter to postal codes containing a certain threshold number or percentage of people/households with the desired variable. To choose a sensible threshold, you may wish to run a separate Output to find out the average statistic for a variable in the city.

For example, after running a separate Output, you could discover that people aged 65 or older make up 11.85% of the Kitchener population as a whole. So you would certainly want to filter out postal codes that contain a lower-than-average percentage of those people. You might even go so far as to filter to postal codes containing 25% or higher populations of age 65 or over. You can choose.

To add "greater than" or "less than" criteria to your filter, use the Operators tab of the Create Filter Formula dialog box: 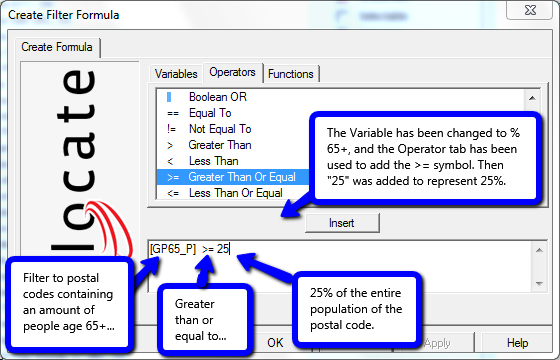 4. Click OK. Your filter is added and postal codes are automatically removed from your Pick Geography selections based on the filter. In this example, we've filtered the 5659 postal codes in all of Kitchener to just 552 postal codes which have higher than average (25% or more) populations aged 65 or older.

Now that we've filtered to more relevant geographic areas in Kitchener, we can create an Output with our other variable of interest: expenditure on cellular services.

First, set up the Output on the Output tab (3rd tab). Choose "Create Output as Summary if you only want a statistic for all of Kitchener. This averages the results for each postal code. Because your'e lumping the 552 postal codes into a single summary geography, you can use the Report Output Mode because you're not exceeding the 25 Geography limit for the Report output mode.

If you want to see the variation between all 552 postal codes, don't checkmark this box, and use the File Output Mode. (You would do this if you wanted to find out which specific postal codes had the highest average expenditure). 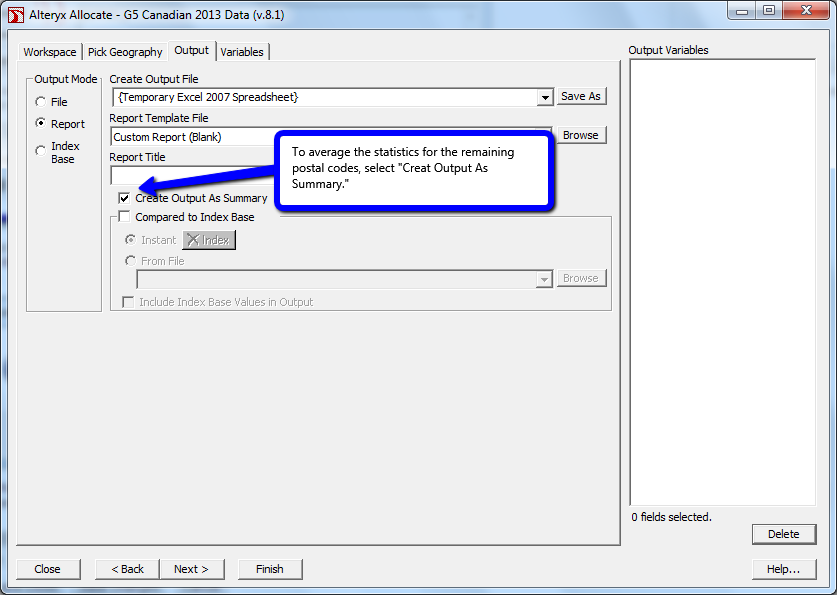 The resulting report provides the following statistic (note: the table below has been re-formatted and titled from the original Output):

"What do people aged 65 or older spend, on average, on cellular services per year in Kitchener?"

cannot be answered as is. However, a similar statistic can be generated:

In Kitchener, postal codes consisting of a high percentage (25% or more) of people aged 65 or older, on average, spend $634 per household per year.