How do I Integrate Research as Evidence? 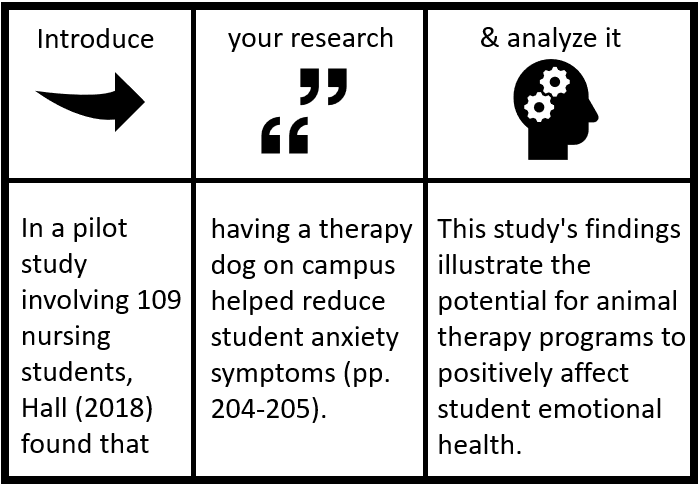 Why is Evidence Needed?

Evidence makes your writing more convincing. Without evidence, your ideas may appear to be unsupported personal opinions. Back up arguments or recommendations with proof.

❌What Not to Do 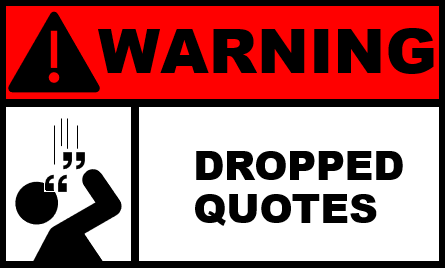 The following quotation is not integrated; it is dropped on the reader suddenly with no context or explanation.

Evidence should blend seamlessly into your own writing. You don't want to confuse your audience by suddenly switching to someone else's voice with no transition or explanation.

When you integrate evidence, you tell readers that they are about to read information from another source. Here are some common patterns to try!

As you analyze your research to build an argument, always think about your reader's perspective. Think about how reasonable or defensible your claims would be to a critic. To help you build up defensible claims that are unhindered by logical errors, we've listed some common logical fallacies to watch out for below.

Circular Reasoning is when you try to prove a claim by simply rephrasing the claim as a piece of evidence.

Example: Domestic cats are prodigious hunters because they are so successful at pursuing and killing prey.

What’s wrong? This claim (domestic cats are effective hunters) is backed up with a restatement of the very same claim (they excel at catching prey). A strong argument requires specific evidence!

Hasty Generalizations are when you base a claim on insufficient evidence or when you unfairly jump to conclusions about a group based on a small sample.

Example: During my co-op, my supervisor was so kind and generous with her time; women are extremely supportive, and businesses need them to succeed.

What’s wrong? The behaviour of one woman does not justify a claim about every woman. Be specific to avoid unfair generalizations or stereotypes.

Fixed: During my co-op, my supervisor was so kind and generous with her time; she was extremely supportive, and businesses need leaders like her to succeed.

Example: Japan is a masculine society, and a Canadian woman working there would not be respected as a manager.

What’s wrong? A claim like “Japan is a masculine society” needs evidence to back it up. Furthermore, what proof do you have that a Canadian woman wouldn’t be respected as a manager? By making your claims more specific, and by using research to back them up, your writing will be more nuanced and convincing!

Fixed: In Japan, like in many other countries, gendered expectations are an important part of business life (Leblanc, 2011, p. 116). A Canadian woman who moves to Tokyo to work as a manager would need to develop new skills in order to negotiate unfamiliar gendered expectations.

Non Sequitur (It Does NOT Follow) is when your evidence does not relate to your claim, or it is when your conclusion doesn’t logically follow from the evidence.

What’s wrong? The premise is not the issue, but the conclusion following from it is confusing because the chain of reasoning and connection has not been explained.

Fixed: Every year, many young children injure themselves while on playgrounds (Canadian Public Health Association, 2019, p. 1). Therefore, after-school sports clubs that include playground activities require increased funding so that they can provide adequate playground supervision.

Slippery Slope errors happen when we make if/then statements that are not adequately justified. Discussing possible implications of evidence can be useful, but only if the claims are defended with adequate reasoning.

Example: If Conestoga College does not implement therapy dog programming, rates of depression will skyrocket.

What’s wrong? This is an exaggeration, and there is no evidence offered to show that this prediction is reasonable. Try tempering your inferences to make them defensible.

Fixed: If Conestoga College does not implement therapy dog programming, it will be missing out on a unique way to support students struggling with depression.

Weak Source Use is when the evidence you use is unable to adequately support your claim.

What’s wrong? If you do a little research on the source cited above, you will find that Dr. Oz faced legal repercussions for his unsupported claims about green coffee extract and weight loss; much of the research he used was retracted (Belluz, 2015, para. 6; Hamblin, 2014, para. 23). Let thorough research drive your argument.

Fixed: There is little evidence to indicate that green coffee extract is an effective weight-loss supplement (Belluz, 2015, para. 6; Hamblin, 2014, para. 23).

You can use these sentence starters to frame paraphrased or quoted material in your papers.

In a courtroom, the prosecution and defence interpret the same material to make vastly different arguments; it's your job, just like a lawyer, to explain how the evidence supports your argument. Remember,

You can use these sentence starters to help you begin analyzing the evidence you incorporate into your papers. 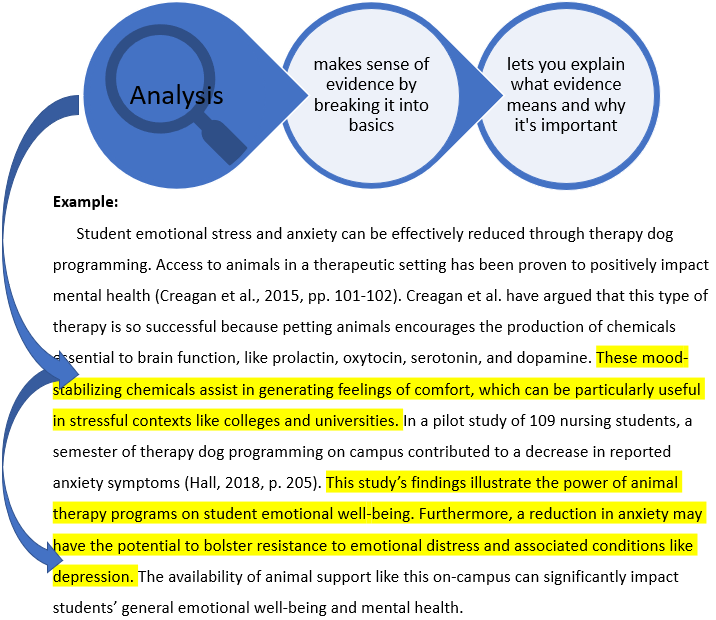